On Wednesday, the Kent-based Schaghticoke Tribal Nation, which wants to open its own casino, announced it “will have no alternative” but to sue the state if the legislation allowing the two federally recognized tribes to open the $200 million-to-$300 million East Windsor facility prevails.

A bus with dozens of tribe members arrived at the Legislative Office Building at 10:30 am on May 9th to ask lawmakers to seek a competitive and open process if the state is to seek commercial gaming. We spoke to the media and legislators about why an open process is so important, and asked an important question: 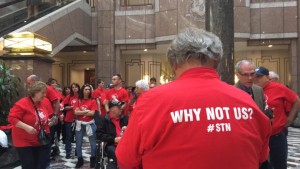 HARTFORD, Conn. (WTNH)– The Speaker of the Connecticut House says he is increasing the odds that an expansion of casino gambling will pass this year.  The prediction comes in the aftermath of greater red ink, and as a third Native American Tribe says they can increase the stakes for the state.

The third tribe is the state recognized Schaghticokes. You will recall they got federal recognition 13 years ago, only to have the U.S. Bureau of Indian Affairs reverse their ruling in the aftermath of massive public and political pressure here in Connecticut.  But the Schaghticokes say they still have friends in the gambling industry that will bankroll them.

Lead by tribal chairman Richard Velky, members of the Kent based Scahghticoke Tribe invaded the Capitol complex today, urging that they be allowed to compete for a third gambling casino that they would like to establish southwest of  New Haven to take advantage of what all parties agree is the potentially lucrative metropolitan New York City area.

The legislature’s Appropriations Committee voted Monday to approve the bill that would enable the Mashantucket Pequot and Mohegan tribes to develop a commercial casino in East Windsor.

The bill still must be approved by the Senate and the House before Gov. Dannel P. Malloy considers whether to sign it into law. A negative vote in the Appropriations Committee would have killed the proposal

An alternative measure that’s also being considered, House Bill 7319, would establish a competitive-bidding process among operators interested in developing a third Connecticut casino. It would require the passage of further legislation before a commercial casino could be opened in the state.

The tribes, respective owners of Foxwoods Resort Casino and Mohegan Sun, are pursuing a third casino as a hedge against the anticipated impact of MGM Springfield, a $950 million resort casino being built in Massachusetts. Connecticut stands to lose thousands of jobs and millions of dollars in revenue if it fails to defend its turf, the tribes maintain.

“This was an important vote today because the Appropriations Committee members clearly recognized the value of saving jobs in Connecticut, jobs that are in most every city and town in the state,” Sen. Cathy Osten, the Sprague Democrat who co-chairs the committee, said. “There are 140 communities in Connecticut that send 12,000 employees to work in the gaming industry every day. … Today’s vote was a vote to stop MGM from destroying Connecticut jobs.”

Before the vote on the bill, several proposed amendments were defeated. The amendments sought to require a referendum in East Windsor, to set amounts of payments to towns surrounding the proposed casino and a provision that would have provided the state’s off-track betting system with a share of the casino’s revenues.

“We thank the committee for its work and look forward to a continued discussion with our partners in government,” Rodney Butler, the Mashantucket chairman, said.

Members of the two tribes descended on the Capitol last week to lobby for passage of Senate Bill 957. This week, members of another Connecticut tribe, the Schaghticoke Tribal Nation, will travel to Hartford to deliver an altogether different message.

“A fair and open process is the only way for the state to go if we are serious about pursuing commercial gaming in Connecticut,” Schaghticoke Chief Richard Velky said Monday. “House Bill 7319 is the bill that gives us that process, and we have more than 40 members of our tribe coming to Hartford on Tuesday to urge support of it.”

Unlike the Mashantuckets and the Mohegans, the Schaghticokes have not been recognized by the federal government, status that would enable them to pursue a federally regulated tribal casino on their reservation in Kent. Instead, the Schaghticokes are now focused on pursuing a commercial casino on nontribal land.

“Studies clearly show southwestern Connecticut has five times the value for gaming development that East Windsor does,” Velky said. “This means thousands of good jobs can be created, the state will have access to the New York market we simply do not have in north central Connecticut, and Schaghticoke Tribal Nation will have a pathway to compete along with everyone else.

“Our tribe stands ready, willing and able to compete for the right to offer commercial casino gaming in southwestern Connecticut — all we need is an open process and a pathway to compete, which this bill (7319) gives us,” he said.

House Speaker Joe Aresimowicz, D-Berlin, said last week the third-casino debate could be dealt with as part of the state’s budget process.

Osten, who has said she’s confident the Senate will pass Senate Bill 957, said she prefers the matter be decided by a bipartisan vote on a standalone bill.

“That would give people an opportunity to see exactly what they’re voting on,” she said. “This bill might need some tweaking but I think both sides are pleased with the direction it’s going in.”