Kent, Connecticut — Today, the Chief of the Schaghticoke Tribal Nation (STN), Richard Velky, testified before the Connecticut General Assembly’s Public Safety Committee, urging legislators to amend Senate Bill 357 (An Act Concerning Gaming). During his testimony, Chief Velky asked the committee to “keep focused” on the bill’s stated purpose, which is to amend and correct the State’s bingo laws.

“…the Schaghticoke Tribal Nation is a Connecticut recognized tribe, just like the Mashantucket Pequot Tribal Nation and the Mohegan Tribe. And as many of you know, we have been pursuing an opportunity to create our own gaming entity,” Velky remarked. “We therefore ask the Committee to amend S.B. 357 to give the Schaghticoke Tribal Nation…and all state-recognized tribes…an opportunity to conduct tribal bingo operations…and ensure STN is given equal consideration for any future commercial casino in Connecticut.”

“To us, tribal gaming is about creating an economic opportunity for an impoverished people and if we were permitted to pursue gaming, we would use that opportunity to create jobs for us and for the surrounding communities,” added Velky.

The Schaghticoke Tribal Nation is one of the oldest state-recognized tribes in the U.S., formally recognized by the Colony of Connecticut in 1736.

Take a look at what went down in the Republican-American the other day: Tribal_chief_on_a_mission_for_his_heritage 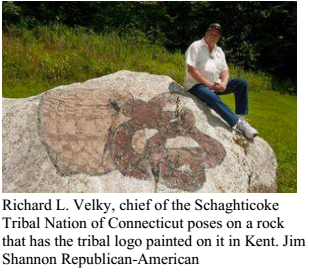 Joseph De Avila authored a column in the Wall Street Journal on the Indian tribes of Connecticut and the potential BIA rule change:

“…Under one proposal being considered by the federal Bureau of Indian Affairs, a tribe could bypass other requirements of the complex federal-recognition process if it has held a state-recognized reservation since 1934. The current rules are tougher: Tribes need to document they have been a distinct community with political authority since first contact with European settlers. The change could ease federal recognition for the three Connecticut tribes, which have struggled to document a continuous history. Two of the three tribes have won federal recognition in the past, but lost it after the state appealed…”

From THE ASSOCIATED PRESS –

. . . But House members were more critical of Connecticut’s efforts to get aid for towns that are fighting BIA tribal recognition decisions. Instead, said Rep. Frank Pallone, D-N.J., “I think it’s just the opposite. We shouldn’t give money to the towns, we need to give money to the tribes.”

He said states like Connecticut and its local leaders are trying to influence the recognition process “in a way that is inappropriate.”

Rep. Nancy Johnson, R-Conn., told the panel that the state is not anti-Indian and does not challenge the idea of tribal sovereignty. But she referred to the BIA’s recent federal recognition of the Schaghticoke Tribal Nation in Kent, and said the agency did not adhere to its own regulations when making that decision.

“The BIA process has been an absolute travesty,” she said. “The standards absolutely have to be clarified and adhered to.” . . .