Indian country has welcomed a set of proposed regulations to reform the federal recognition process, but a provision that would hand third parties veto power to quash a tribe’s request for reconsideration of its petition is raising an outcry that political influence from Connecticut politicians is once again tainting the process.

Interior’s Assistant Secretary – Indian Affairs (ASIA) Kevin Washburn announced the publication of the proposed regulations Thursday (April 22). The proposal follows up on draft regulations issued last June that were widely applauded in Indian country as the best thing to happen in decades to a system that’s been described as “broken, long, expensive, burdensome, intrusive, unfair, arbitrary and capricious, less than transparent, unpredictable, and subject to undue political influence and manipulation.” . . .

. . . “By allowing the third party consent to decide the fate of the tribes, the third parties are no longer participants, but they’ve now become the judge,” STN Chief Richard Velky said. “I know ASIA Kevin Washburn is trying to do good for Indian country. I believe the BIA needs to make some changes, but this isn’t change we can believe in. This is political influence – corruption – by the state of Connecticut that went into the White House and got third party veto power over a tribe’s right to ask for reconsideration based on the merits of its petition under the revised regulations.” . . .

It’s the oldest continuously published newspaper in the United States. George Washington placed an ad in it to lease part of his Mount Vernon land. Thomas Jefferson sued it for libel and lost. Mark Twain tried to buy stock in it, but was rejected. It’s Connecticut’s largest daily newspaper. And now it’s joined Sen. Richard Blumenthal and other elected officials in a racist anti-Indian campaign against reforming the federal recognition process – all in an effort to stop additional Connecticut tribes from being acknowledged and opening casinos.
The Hartford Courant, which began as a weekly in 1764, published an editorial August 8 warning against a draft proposal of changes to the Interior Department’s federal acknowledgment process that Interior Assistant Secretary for Indian Affairs Kevin Washburn released June 21.

Blumenthal is leading the campaign in opposition to the reform effort in order to stop the Eastern Pequot Tribal Nation (EPTN) and the Schaghticoke Tribal Nation (STN) from possibly regaining the federal acknowledgments they received in 2002 and 2004, respectively. The acknowledgments were overturned in 2005 after Blumenthal led a relentless and orchestrated campaign of opposition and political pressure involving local and state elected officials and an anti-Indian sovereignty group and its powerful White house-connected lobbyist, Barbour Griffith & Rogers (BGR). An Indian Country Today Media Network editorial, “A Lack of Interior Fortitude,” describes “the force of outside pressure” and its impact across the country…

But equally important, says Schaghticoke Tribal Nation Chief Richard Velky, the ruling will help the nation in its campaign to regain federal acknowledgment. That recognition—granted by the Bureau of Indian Affairs (BIA) on January 29, 2004—was revoked in an unprecedented move by the BIA in 2005, after a relentless 18-month lobbying campaign by Connecticut politicians and the very powerful lobbyist for a group of wealthy anti-casino landowners, Barbour Griffith & Rodgers, and at least a dozen municipalities in the state. Connecticut Federal District Judge Peter Dorsey dismissed the tribe’s appeal of the reversal in 2008, based largely on the fact that he believed federal decision-makers who said they were not affected by the tsunami of political pressure put on them. That political influencing was so blatant and the reversal-process so notorious that one Indian law attorney in Washington recently called it “a shameful example of all that’s wrong with the federal recognition process.” . . . 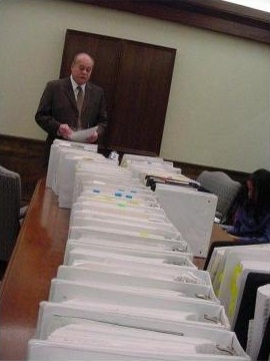 Photo of Schaghticoke Tribal Nation Chief Richard Velky and the 40,000+ pages of documents that granted the STN their legitimate and merited Federal Recognition on Jan 29th, 2004.